A Renovation Project in the Making

A Renovation Project in the Making

Today, I decided to share with you for the first time a design project that I was working on for the past four weeks. There’s , no make that two reasons that make this renovation project so special. The first reason was a very tight budget. The second reason was the particularly short timeline for such a project. This is about the renovation of an old building, formerly used as a home for the elderly, now a hostel/lodge that included the renovation of 13 rooms and en-suite bathrooms plus one bedroom flat from scratch. 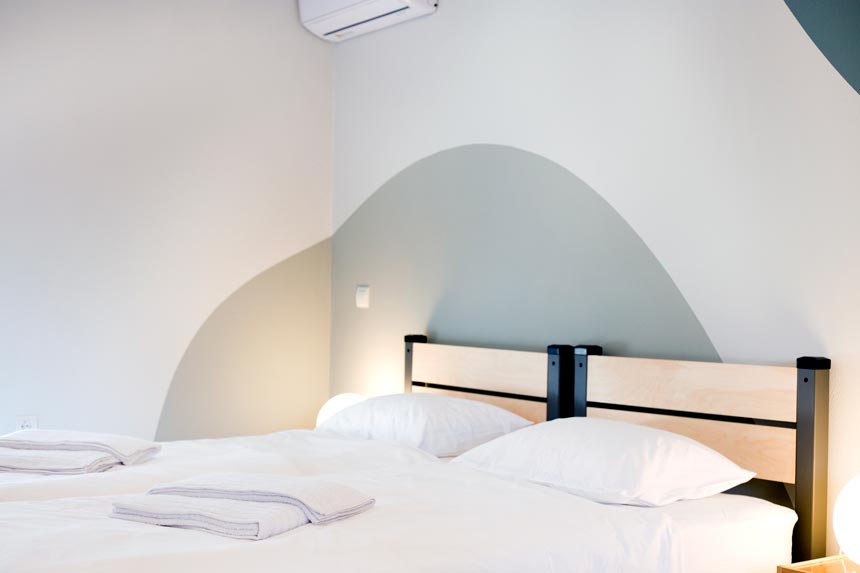 Obviously, this is no ordinary makeover. The gut renovation of 14 bathrooms and refurbishment of 14 rooms in just over two weeks was an ambitious undertaking to say the least. But, it breathed a new fresh spirit into this “lifeless” old building.

I compiled a YouTube video with footage from this renovation in the making starting from day 1. I think it would be worth while your time to watch this undertaking, because it includes footage from the works during the renovation, that will help you understand better the nature of the project. (Just click on the link below). 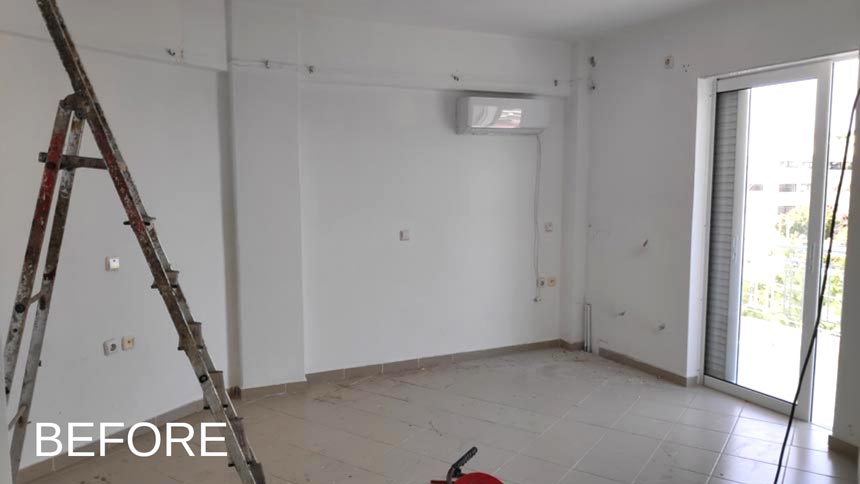 Room No 5 before the renovation. 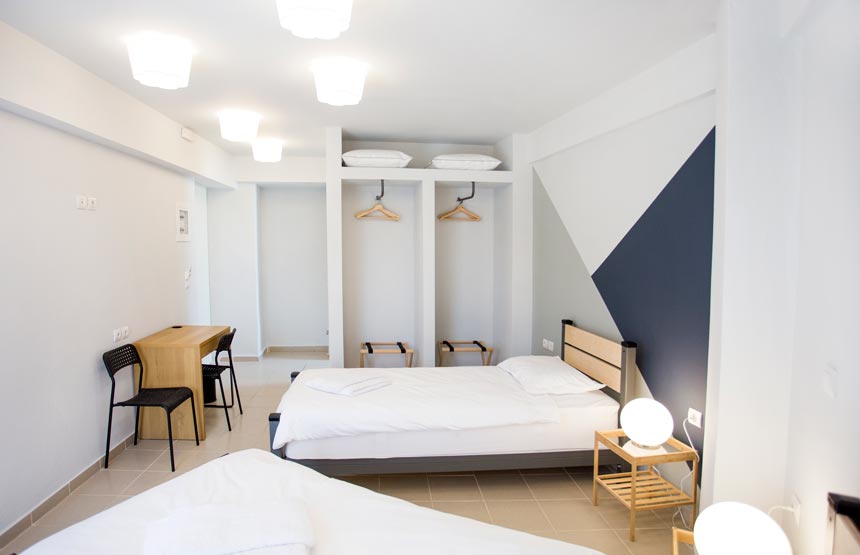 Room No 5 after the renovation, but just a step away from completion. 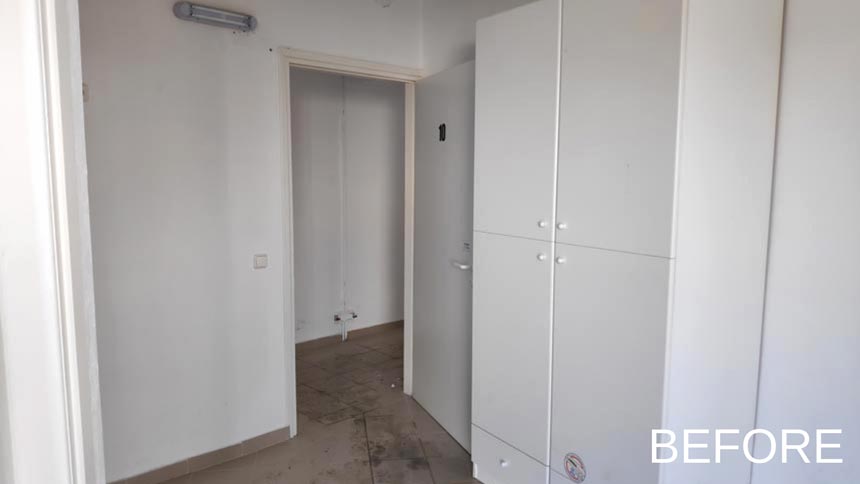 Room No 10 before the renovation. 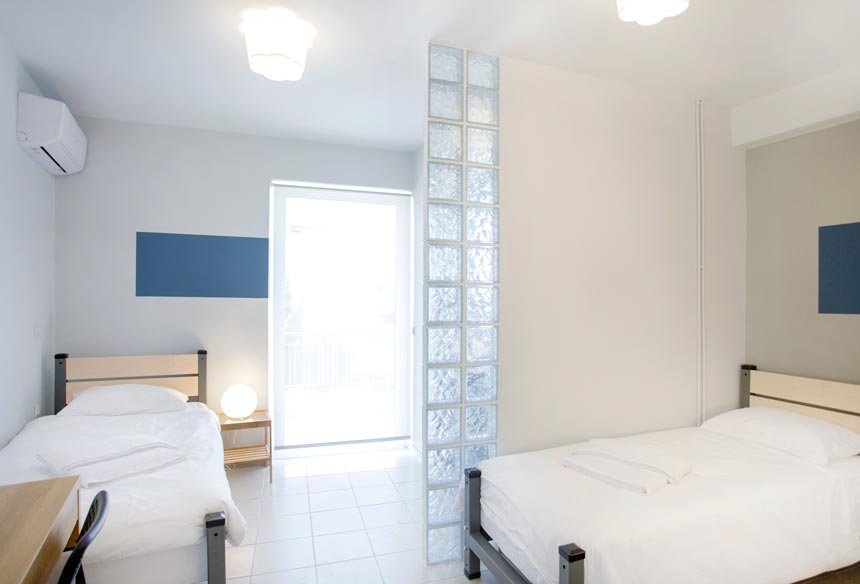 Room No 10 after the renovation.

Now every project has a given budget. But when the budget is small though, then creativity has to compensate for the limited funding. Therefore, I had to work with whatever I had at hand and at the same time, come up with design solutions that allowed me to maximize the potential of each space.

That essentially meant that I set priorities for different jobs and created a flowchart with various job stages. The very first stage was to gut renovate the bathrooms and re-do all the wiring. That set a good, solid foundation to build on a decorating theme and hence, create the desired cohesion.

Next, came the decorating of the rooms that included custom made beds that would double serve both as single and/or bunk beds. New mattresses, linens, and accessories were added on. But at the end of the day, it was two design decisions I made that were of decisive importance and made all the difference in the world.

The first decision was to not to use ordinary closets. Instead, I designed and allocated an “open” wardrobe and luggage space thus, keeping the rooms looking airy and less crammed. That of course, worked exceptionally well especially with the smaller size rooms, some of which had a very irregular floor plan.

The second decision was to use color blocking based on a specific muted color palette. The color blocking of each room involved geometric patterns and forms to accentuate certain features or simply to create fun and interesting focal points. After all, color is one’s greatest ally when it comes to design.

Lastly, I would like to mention that since this project is still in the making, there will be a follow up with the other renovation stages that are going on as I type these lines. These stages include the stairwell, the reception, and the outdoor spaces.

Ultimate Gray and Illuminating :: Pantone Colors of the Year 2021

https://te-esse.com/wp-content/uploads/2020/09/DULUX-Colour-Of-The-Year-2021-BRAVE-GROUND-feature.jpg 440 440 Velvet Velvet https://te-esse.com/wp-content/uploads/2020/01/ADP_9072_1.jpg September 10, 2020 September 10, 2020
Login to Te Esse by Velvet
Reset Password
Enter the username or e-mail you used in your profile. A password reset link will be sent to you by email.
This site uses cookies in order to provide a better user experience. We'll assume that you OK with it, but you can opt-out if you wish. Read more.