Every year during the summer, most Greeks long to travel to the Greek islands. The Cycladic island complex in the Aegean Sea is by far a top favorite destination. Although the mainland as well as other Greek isles offer exquisite sandy beaches and summer resorts that can make anyone believe that Greece is indeed an earthly paradise, the Cycladic island complex holds its fans captive. The reason is that the Cycladic minimalism is an intoxicating life-changing experience, one that we all want to relive year after year. The long summers in the Greek islands are easy, carefree, minimal, inspirational and definitely all about sweet living… It’s the Greek version of the la dolce vita story! 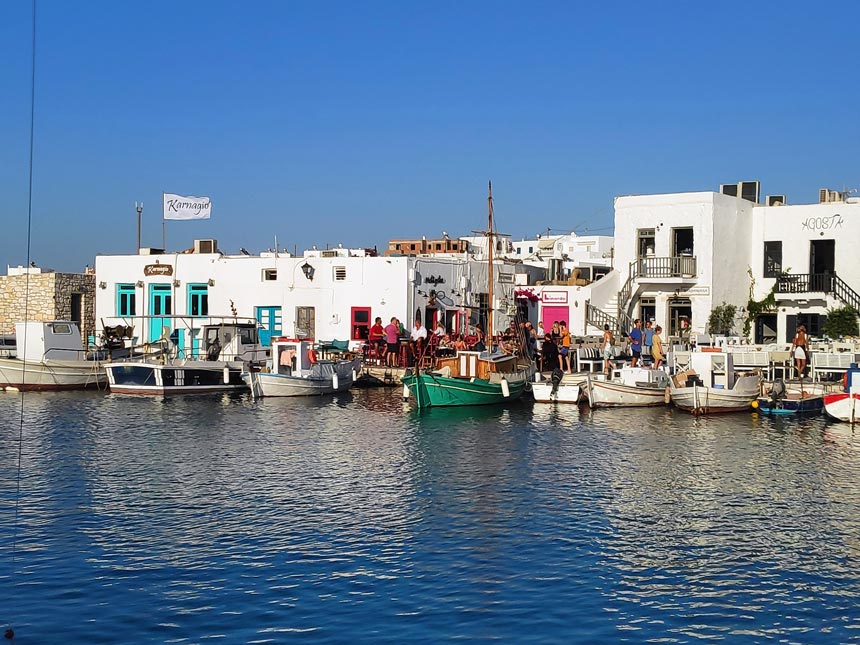 The Cycladic island complex includes islands like Mykonos, Paros, Santorini that are cosmopolitan hotspots. They are islands that suffer from dry spells during the summer with gusts of Northern winds (known as ‘meltemia‘) especially during the month of July that help keep the temperatures relatively lower and making the islands more bearable. Of course, that comes with a price tag! During those windy days, you really should stay clear from the northern beaches unless you enjoy sandblasting something I personally don’t. 😉 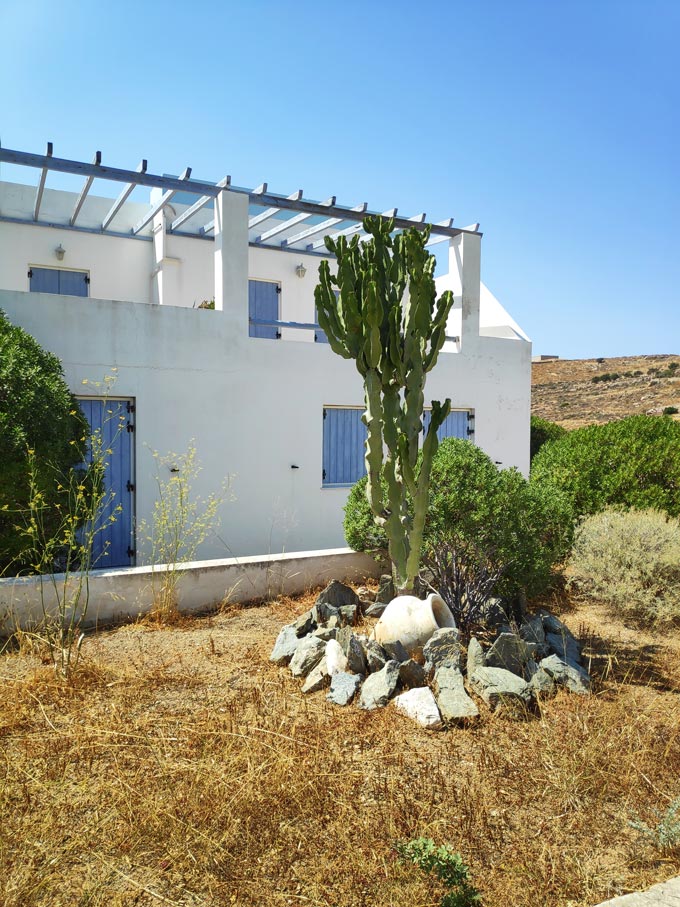 One observation that no one can miss is the lack of forestry in these islands. Nature has been “rough” in these parts with plenty of seismic and volcanic activity and there’s evidence of that everywhere. The “wild” landscaping in these islands is not only common but a trademark along with all the little white housing scattered everywhere like a white lace.

Minimalism in the Cyclades islands was not a trend. Instead, it was born out of necessity and as such it is simple, humble, raw, rough and unforgettable. But more importantly it is unpretentious. It is real and it feels “natural” within its surroundings. (You may want to read a comparison with other types of minimalism). 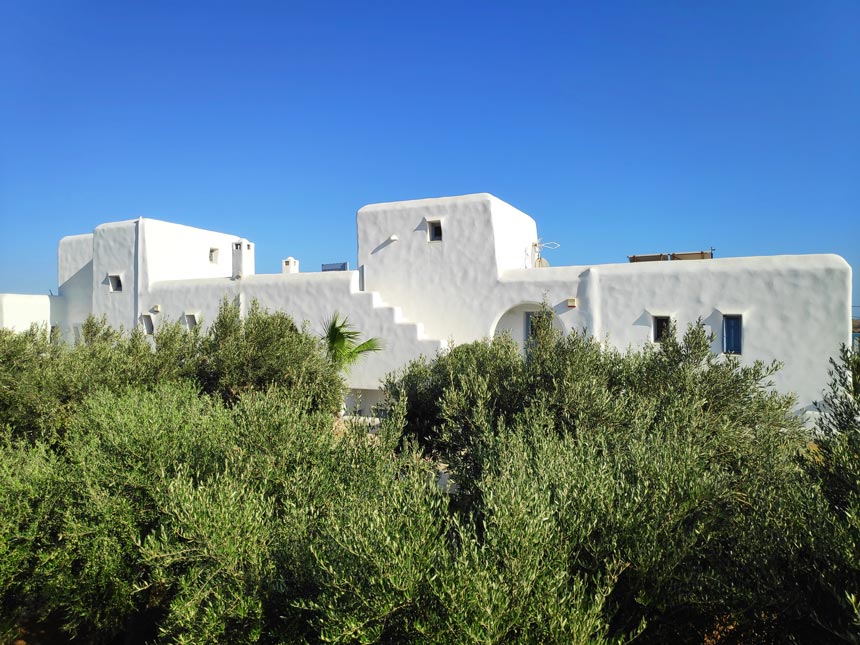 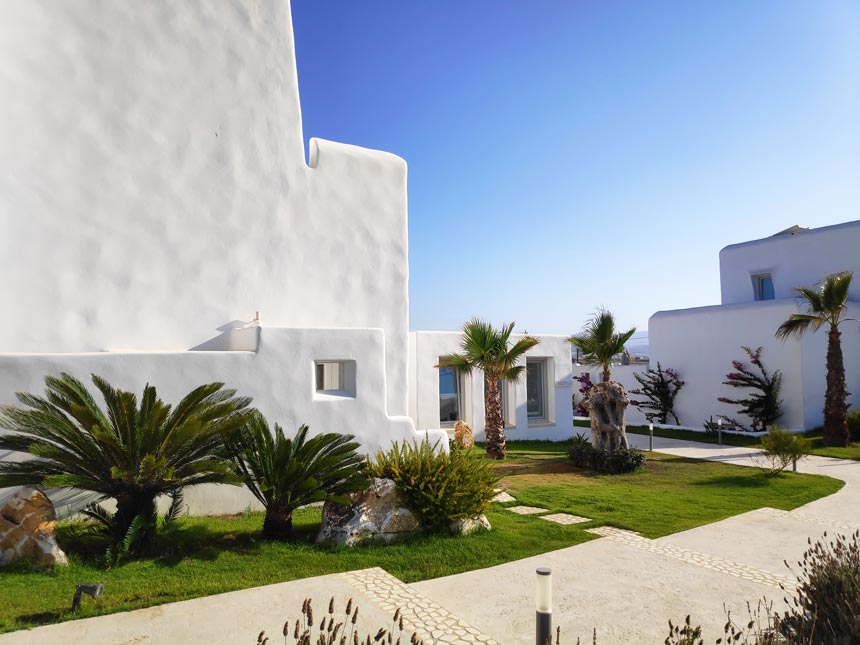 Cycladic minimalism features earthly elements (especially stone for walls and stalks for pergolas) in a predominantly coastal blue and white setting. The low rise housing for the most part became an integrated part of the environment. Just picture white-washed spaces with blue, green or red doors and windows. 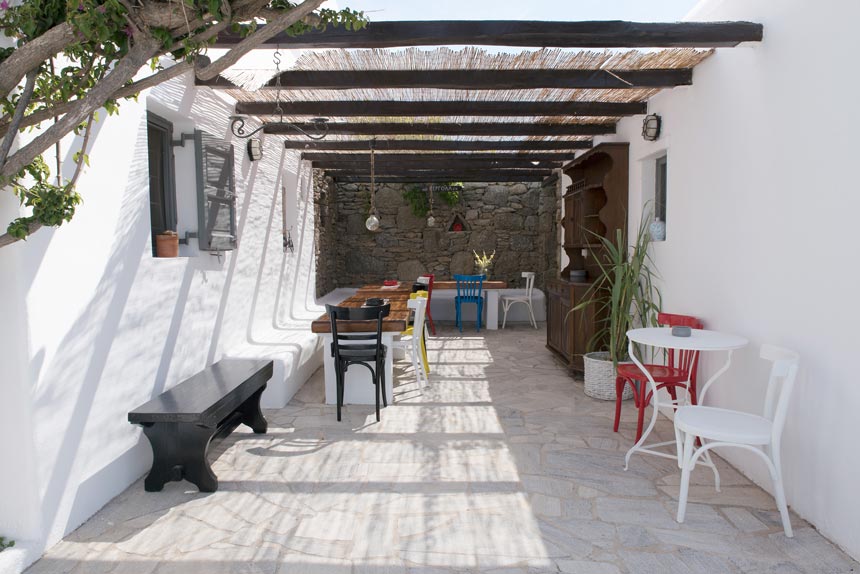 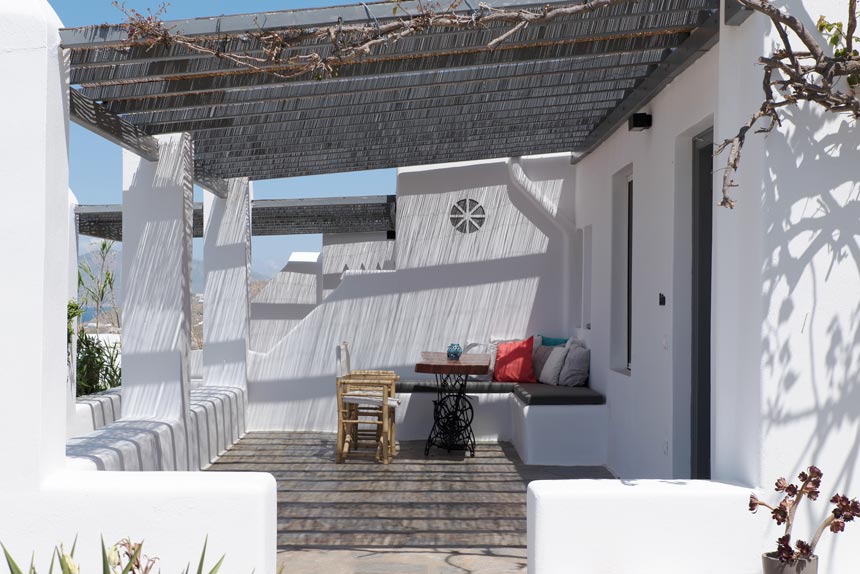 These splashes of bold, vivid colors act as bright reminders of humans living in a rough textured terrain and sometimes even an unfriendly environment. Stone slab flooring is very common and creates a sense of continuity when it runs from outdoors inside, blending with the surrounding landscape (think of Santorini’s cave homes before tourists came flooding).

Built-in beds, sofas and shelving accommodate the basic needs for resting, sitting, and storing. Concrete surfaces (i.e. walls, floors, basins, counter-tops, even entire rooms) in shady colors are to be found almost anywhere. They did away of any unsightly joints that remind us of “progressive” human intervention. Instead, these concrete surfaces add on a visually textured feel to everything. Hence, microconcrete and microcement became very popular techniques that have flourished over the last decades (especially with the inclusion of resin in the mix that added further durability). 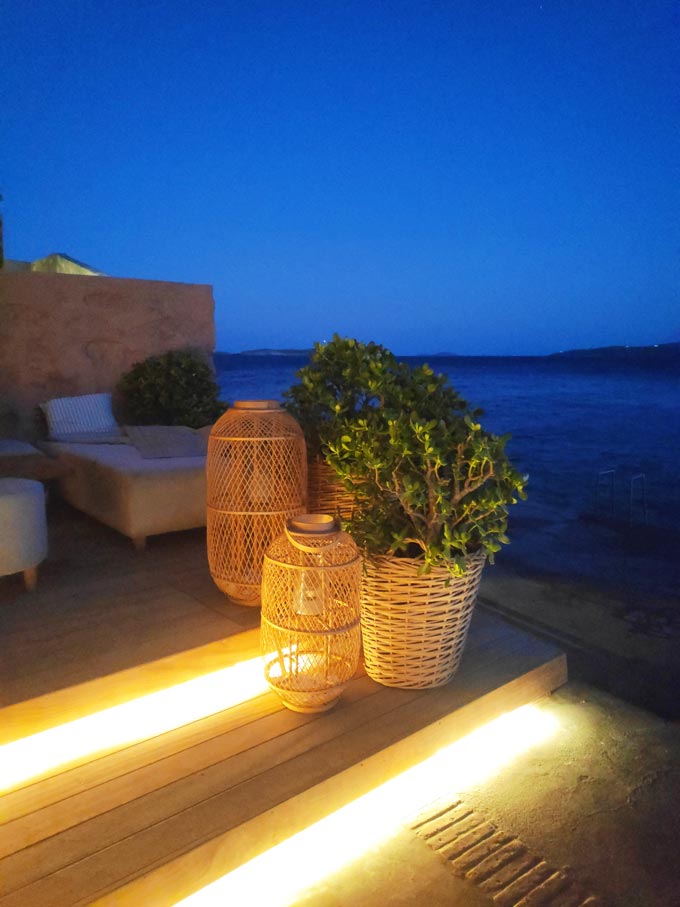 Living in a house with this type of minimalism is an experience because it allows the appreciation of the bond between mother nature and the bare necessities of life. Of course, this experience over the years has been enhanced and stretches way beyond living in a shelter. As a matter of fact, it can prove to be super lush and luxurious, especially in the most popular islands.

Nonetheless, the principle is the same. The open invite to walk barefoot, take in the views, relax and get in touch with the surroundings is always there at the reach of our hand. And, it is a great way to abstain from the urban “bad” habits of pluralism and maximalism and enjoy more the little things. 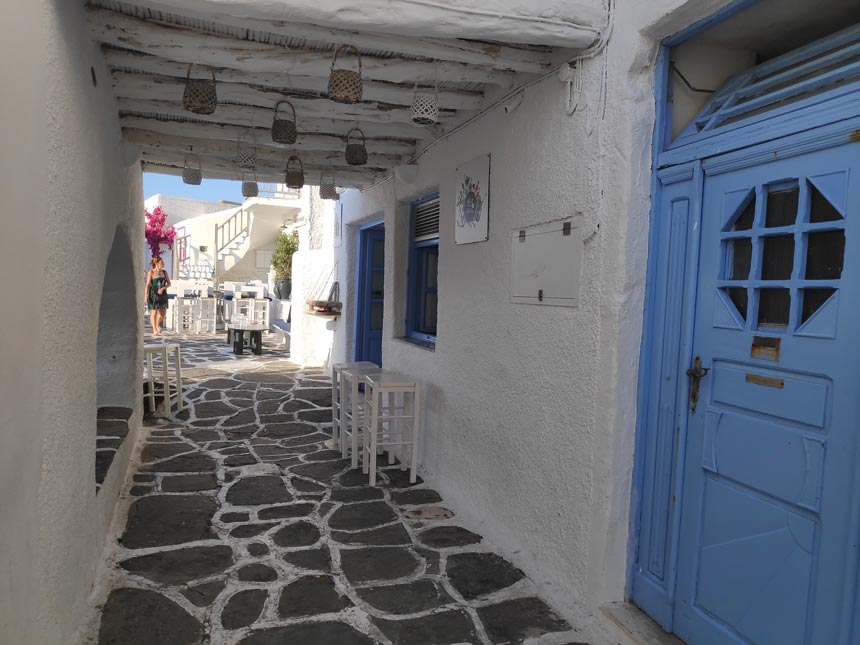 Wild nature is at the doorstep, the sun is merciless and the wind’s chase pauses only within the maze of narrow, winding alleys. The white surroundings work like the perfect backdrop for our personalities to come through and fill up the space with our very own qualities, our style, our moods. 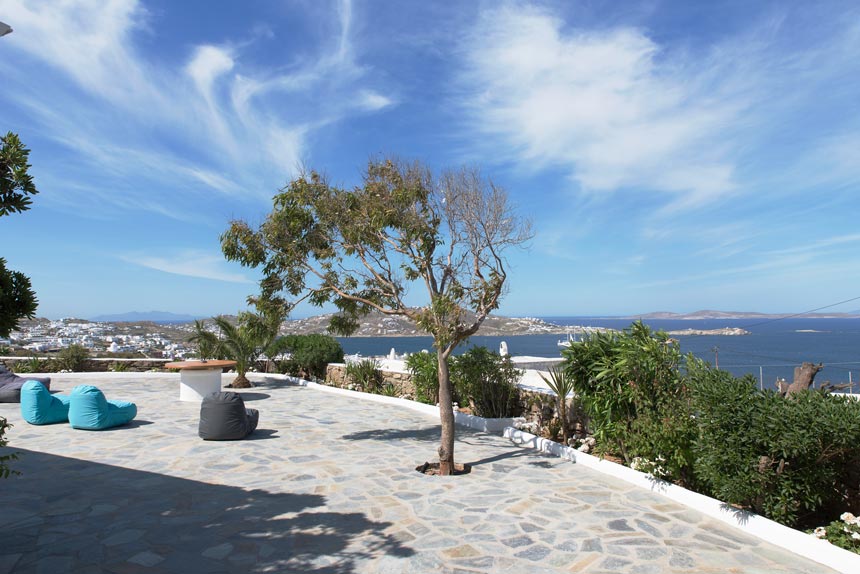 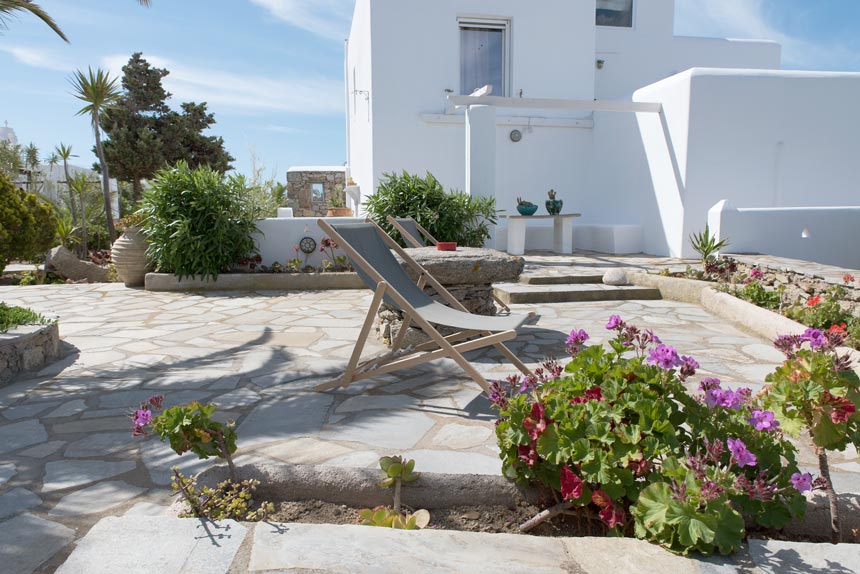 Even our perception of time and space changes at the islands, not only because it feels like we are too far away from our busy lifestyles having fun and partying hard. I think it has also a lot to do with the actual minimal setting that allows us to focus more specifically on us and our true needs at that given time. It awakens our senses, inspires us and definitely reminds us that living can be indeed sweet and dandy!

I hope you’re enjoying a relaxed and inspirational summer,

Previous
6 Key Elements Parisian Women Can Teach Us
Next
Packing for the Greek Islands: The Summer Guide

July 25, 2017
Previous
6 Key Elements Parisian Women Can Teach Us
Next
Packing for the Greek Islands: The Summer Guide
You might also like
One of the following
January 13, 2020

How To Create the Perfect Scandi-boho Home Style