Architectural Gems on the Greek Island of Syros

Architectural Gems on the Greek Island of Syros

https://te-esse.com/wp-content/uploads/2017/01/vaporia_4_2_feature.jpg 440 440 Velvet Velvet https://te-esse.com/wp-content/uploads/2020/01/ADP_9072_1.jpg January 27, 2017 February 5, 2020
Midst the Cycladic complex lies a “Lady Charmer” the isle of Syros, rich in cultural heritage and astonishing architecture – a huge inspiration source. Last summer, I was lucky to spend five weeks in Hermoupolis, the main town after god Hermes, as a guest in a renovated house overlooking its ancient port and the Aegean Sea. Syros is the perfect holiday destination for a “real Greek experience,” with courteous people, and plenty of cultural events to keep everyone busy. Walking through its alleys I peeked through the windows or occasionally open doors and became fascinated by their home interiors – old hardwood flooring worn by the passage of time and high ceilings with a story to tell; today I’ll be sharing with you some of those awesome architectural details that are not mentioned in travel guides. Walking through its alleys I peeked through the windows or occasionally open doors and became fascinated by their home interiors – old hardwood flooring worn by the passage of time and high ceilings with a story to tell; today I’ll be sharing with you some of those awesome architectural details that are not mentioned in travel guides. The seaview from the Quarter of Vaporia in Syros

The Notable Architecture of Syros

Syros, also known as Syra, is a perfect blend of a Cycladic layout, medieval elements, neoclassical and contemporary architecture. The town of Hermoupolis has an atmospheric cosmopolitan ambiance.  It has remarkable Venetian buildings, 19th century neoclassical mansions, marble squares, imposing splendid churches, both Greek Orthodox and Catholic, whitewashed houses ascending the hill, colorful doorways and countless marble stairs lining its narrow paths leading you all the way up to Ano Syros (built by Venetians during the 13th century).  This is a walker’s paradise. Left: View standing from the Miaouli Square. Right: The Church of Saint Nicholas. The imposing Town Hall at the central marble square. Partial view of the Miaouli Square, paved with marble slabs, from the Town Hall after sunset.

During the 19th century neoclassicism flourished and two of its most notable examples were built, the Town Hall designed by the architect Ernst Ziller and the Apollo Municipal Theater, a miniature of the Scala Opera House. But, aside from these many mansions of wealthy families were built by the sea, setting a beautiful example of architectural brilliance at the most scenic quarter of Hermoupolis, known as Vaporia.

These mansions have beautiful entrances, embellished marble balconies, hardwood flooring and high accent ceilings decorated with amazing paintings. Some of them even have wall murals acting as silent reminders of another era’s past glory. 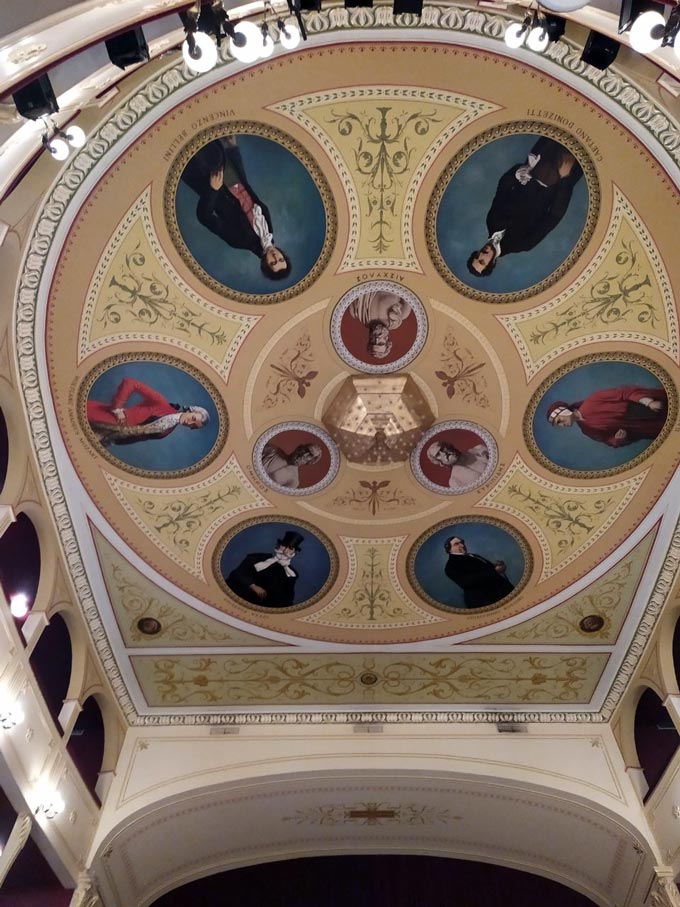 The ceiling mural at the theater Apollon in Hermoupolis, Syros. Entryway to a luxury hotel Apollon, in Hermoupolis with an accent ceiling. Looking up inside the Town Hall Ceiling mural in the Town Hall. Inside the Town Hall. Notice the murals on the wall. The coffee house in one of the Town Hall’s atriums.

Some of the surviving neoclassical mansions have been restored and a few of these have been converted into small eclectic hotels while preserving elements of their original architectural character. It is quite a treat to stay in any one of those small boutique luxury hotels and see how elements from different eras have fused into a wholesome well balanced synthesis.

Hope you enjoyed this visual journey…

January 27, 2017
Previous
Special Feature: Magic Rugs (Part I)
Next
Home Improvements Chapter 7: All about kids
You might also like
One of the following
January 14, 2020